Serving the Greater Boston community for over 100 years. 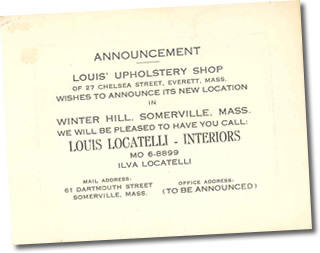 Read about us on

For over 100 years, three generations of the Locatelli and Smith families have been serving greater Boston with fine reupholstery, slipcovers, cornices and headboards. At Paine Furniture of Boston and Dom Locatelli of Wellesley, Louis Locatelli learned his craft. Louis and his wife, Ilva, began their business venture in Everett, MA. In 1924 Louis' Upholstery Shop was born with Louis as the "Master Upholsterer" and Ilva becoming one of the best seamstresses in the area. Ilva also became an accomplished business woman. Their business flourished. In the 50s another family member, their son–in–law, Victor Smith, joined them. Victor learned his trade well. He soon became well known as a "Master Slipcover Fitter". Many decorators from around the region asked for his services. Not long after, Louis and Ilva moved their Upholstery Shop to Somerville, MA, where they became well known in the community. At that time they changed the name of the business to Louis Locatelli — Interiors. In the late 70s and early 80s Louis' grandson, Gary Smith, acted has his apprentice. Gary, the third generation, learned his craft from his grandfather, grandmother, father and various employees that worked in the shop over the years. Gary, a business graduate from Salem State College, became top in his craft in the art of reupholstery and slipcovers.

For the last 20 years, the company has been known by Locatelli-Smith Interiors. The company has moved its base of operations from Somerville to Middleton, MA where it continues to operate today. They lovingly view both areas as their home towns. The work Louis Locatelli started all those years ago is alive today in his grandson Gary Smith, as Locatelli-Smith interiros continues to serve the Greater Boston community.